This Fall, Pittsburgh’s Performing-Arts Groups Adapt To The Pandemic 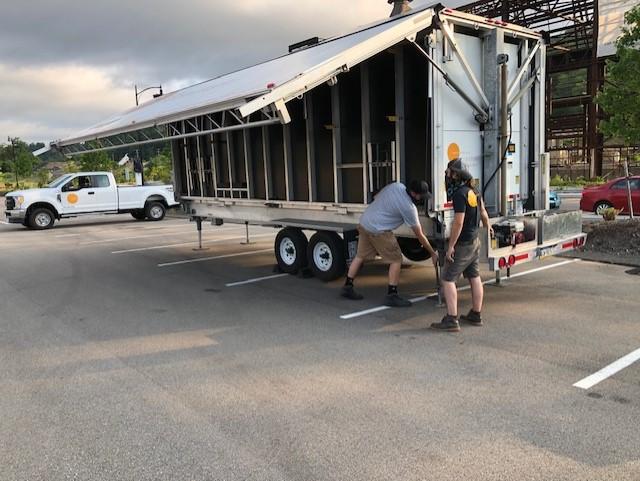 Labor Day heralds the start of the fall arts season in Pittsburgh. And in any other year, theater companies, dance troupes and other performing-arts groups would be preparing to pack indoor stages with performers, and fill seats with patrons.

But as with nearly everything else in public life, it’s all rather different in 2020.”Crisis is a great opportunity to think about why you do what you do”

The coronavirus pandemic means government-imposed limits on the size of indoor gatherings. It also means safety guidelines that determine how physically close artists themselves can get to create, rehearse and perform.

Troupes are adapting. Many are building on the online programming they offered this spring and summer, after the pandemic first hit. But a few are experimenting with in-person programming.

City Theatre, for instance, is entirely reinventing itself, at least temporarily. The venerable company has built its reputation staging full seasons of new plays in traditional theater spaces at its home, on the South Side. But starting Sept. 10, it’s producing the Drive-In Community Arts Festival at Hazelwood Green. The 13 nights of music, dance, comedy and more will play out over three weeks on a rented mobile stage, placed on a big surface parking lot on the sprawling former mill site overlooking the Monongahela River.

“Crisis is a great opportunity to think about why you do what you do, and what it is that you do, and to kind of get back to your principles,” said City Theatre artistic director Marc Masterson. “I think there are a lot of people who are hungry for a safe way to celebrate live performance, and this drive-in gives us the opportunity to do that.””At least you’re looking at actors live who can touch each other and be in the same space together”

The drive-in approach to the arts isn’t completely novel locally. For instance, the Starlite Drive-In, in Butler, has been hosting live music and comedy for weeks. Other outdoor performance series include Arcade at the Oasis, standup-comedy shows presented Downtown by Arcade Comedy Theater.

But while performing outdoors seems like a real departure for City Theatre, one of Pittsburgh’s legacy arts groups, it’s also a return to its 1970s roots as a City of Pittsburgh-funded troupe that staged shows in parks. It is also a chance for City to team with local arts-and-culture organizations like the Pittsburgh Cultural Trust and the August Wilson Center for African American Culture to curate programming. (Other partners include WESA sister station 91.3 WYEP.)

The festival will be followed at Hazelwood Green by a three-week run of “Frankenstein,” a multimedia show by internationally touring, Chicago-based Manual Cinema. The adaption of the Mary Shelley classic includes live elements, including an original score performed in person for the drive-in audience.

The sound of the performances will be broadcast to car radios on an FM signal. The Hazelwood Green lot, which slopes slightly for a natural-amphitheater effect, can accommodate up to 115 cars. At two patrons per car, that’s nearly as many as might attend a sold-out mainstage show at City’s South Side headquarters.”We don’t want to not be relevant”

Another group venturing back into modified live performances is Pittsburgh Opera. This past spring, the Opera had to postpone two shows; it subsequently announced its 2020-21 season, only to postpone several of those shows, too — including two big productions at the Benedum Center, Dvorak’s “Rusalka” and Mozart’s “The Magic Flute.”

Instead, it will stage four productions at its Strip District home base (which it has long used for smaller shows anyway). Each opera will receive six performances, instead of the usual four, but the shows will feel different. Singers will be masked – at least for the season-opener, Mozart’s “Cosi Fan Tutte” (which will incorporate the masks into the already-fanciful costuming). And each performance will welcome only about 50 patrons – a tiny fraction of the 2,000 the Opera might host at the Benedum. At least one performance of each production will be live-streamed free, said Opera managing director Bill Powers.

Online offerings from theater groups have often involved Zoom-enabled readings of plays. But troupes are working to make their online offerings as distinctive as possible, even as Actors’ Equity Association rules require companies to abide by strict safety guidelines.

This summer, Quantum Theatre staged a livestreamed version of Caryl Churchill’s “Love and Information,” with a cast consisting entirely of cohabitating couples performing in front of webcams in their own homes. After the midsummer spike in coronavirus cases here, Quantum canceled an in-person, outdoor production it had scheduled for August. Last weekend, the group launched a season of livestreamed shows with “Constellations,” also starring three sets of cohabitating couples.

“At least you’re looking at actors live who can touch each other and be in the same space together,” said artistic director Karla Boos.

“We’re just doing this for now, because it seems completely premature to try to gather people at all,” she said.

Dance troupe Attack Theatre has not performed in person since November 2019, and has no in-person shows planned. Instead, it produced several online performances and is concentrating on its creative-movement classes for schools and other institutions, said spokesperson Daniel Fleegle.

Attack, for instance, has reached 19,000 students, teachers and audience members with online performances and classes in the six months since the pandemic began, said Fleegle. That’s more than the 12,000 its classes usually reach in a full year.

“That number, getting to that place, is really shocking and surprising for us. And I think partly why we are so especially galvanized to continue exploring what these creative learning programs can look like in a virtual setting,” he said.

Masterson said City Theatre has engaged 28,000 with its online offerings. Boos said “Love and Information,” drew 2,700 views over four days — about the same as a typical three-week run of an in-person Quantum production.

Groups including the Symphony, Pittsburgh Public Theater, the Kelly-Strayhorn and the August Wilson Center have said their online programming has even drawn viewers fromm overseas.

Performing-arts groups’ earned income, from ticket sales and the like, has vanished, of course. Perhaps most prominently, the Pittsburgh Cultural Trust – the region’s biggest performing-arts presenter – had to cancel more than 4,000 performances through year’s end. The group has begun a fundraising campaign to address a $3 million budget shortfall. Pittsburgh Opera is running on half its usual budget, said managing director Bill Powers.

Most groups’ pandemic-era programming, however, has been free – surely one reason for high viewership.

“Maybe it’s going to turn new people on to Quantum who did find price to be a barrier,” said Boos. “It just doesn’t feel right to charge people.”

For many groups, the free, online approach has worked so far because even during normal times, local arts groups typically rely on earned income for only about one-third of their budgets. (The rest comes from grants and other donations.) In addition, online programming can be cheaper to produce than in-person productions: Space rental and set-building costs often drop, for instance. And because there are fewer performances – runs lasting a weekend instead of several weeks – personnel costs drop, too.

Pittsburgh Playwrights Theatre Company is offering a full season, all online. The five shows, most featuring solo performers, will be taped live before small audiences and then streamed. Tickets to individual shows are $25, but artistic director Mark Clayton Southers notes that couples and families are welcome to share a ticket.

“It’s not going to be for profit,” he said. “Basically we just want to cover our costs, and be able to pay our artists … and see if this is a bridge to the next wave of theater and how theater will be done.”

Southers, who founded Playwrights in 2003, said his main concern is keeping the arts part of the cultural conversation.

“We don’t want to not be relevant,” he said. “And we want to treat theater like the American flag: We don’t want it to hit the ground, know what I mean?”