Shall We Gather? Arts Groups Ponder Reopening, And A More Virtual Future 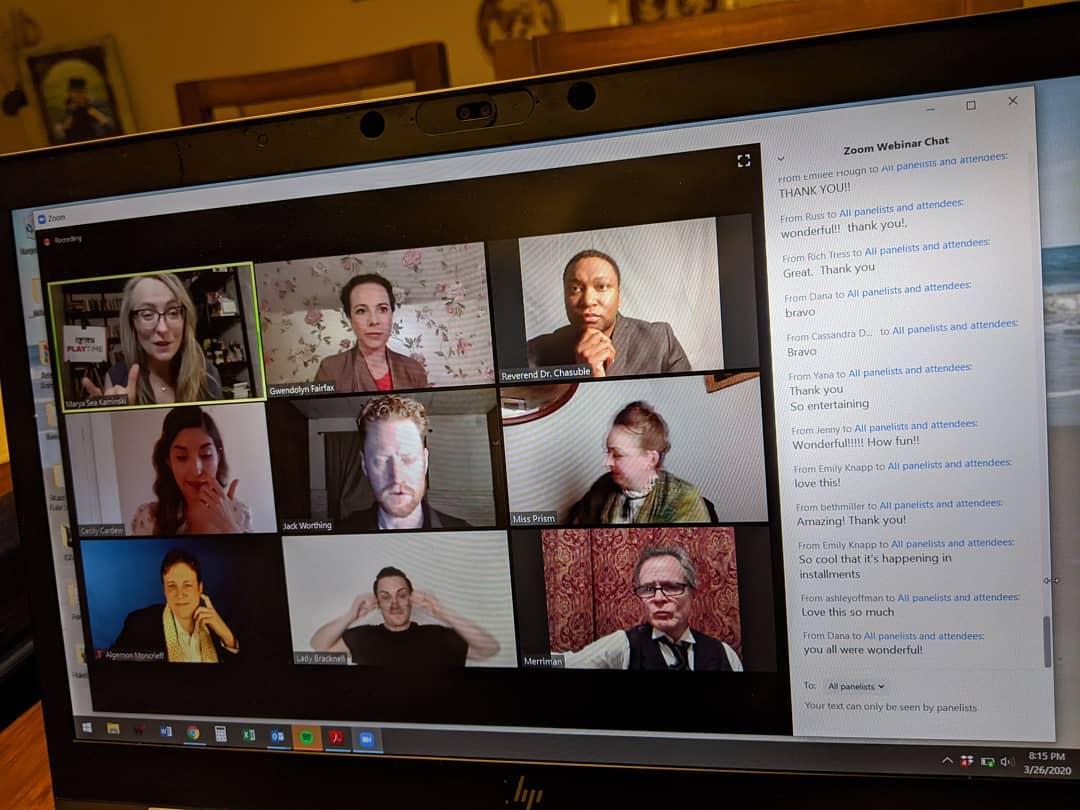 Normally this time of year, the New Hazlett Theater would be buzzing with activity, and theater, dance or music nearly every night of the week – and even during the day.

“You can go downstairs and there’s a guy sitting at the box office with a score laid out in front of him conducting for practice,” said René Conrad, the North Side theater’s executive director, who worked in the historic building, a former Carnegie Music Hall. “Or you can pop your head in and there’s ballerinas in there.”

“You miss all that,” she said.

It’s safe to say patrons of the local arts community feel much the same about the scene as a whole, which is closing in on seven weeks of near-dormancy because of the coronavirus shutdown. Workers have been furloughed, and dozens of stages, galleries and museums of all sizes have gone dark. Most events and new exhibitions well into June have been postponed or canceled outright, even the venerable Three Rivers Arts Festival. And instead of producing and hosting arts events, Conrad is thinking about things like how many people she could seat in the New Hazlett if it reopened with 6-foot distancing rules in effect.”To go from our 300 to 500 seats to 52 seats is where we would be”

“To go from our [300] to 500 seats to 52 seats is where we would be,” she said. “That’s sitting there with a ruler, looking at the seats, saying, ‘OK, I can fit three people in a row if they are six feet apart. … And you have to skip a row, because there’s not six feet between you and the guy behind you.” She’d also have to leave two rows empty in front, to distance performers from audience.

And that’s not all. “The bigger issue is the cast,” said Conrad. “There’s very few performing endeavors that we can do that involve no one touching each other and everyone six feet apart. Are we going do all solos for dance, because how can they be allowed to do a duet? It’s that kind of conversation.”

Even rehearsal might be risky. Matt Mehaffey, artistic director of the Mendehlssohn Choir, said the group’s final practice before the shutdown (for a planned Pittsburgh Symphony Orchestra concert) was March 8. That was just two nights before a small-town choir in Washington state held its own practice amid concerns about the virus. Dozens of those choir members came down with the virus, and two died.

“When this all social distancing ends, a choir might be the single most dangerous place to be, in the world,” Mehaffey said, with a rueful laugh. “People in a room, sitting next to each other, articulating consonants where spit flies out of their mouth, all that kind of stuff.”

Wondering whether it would even be worthwhile to hold events under such conditions is the new normal for arts groups, even as they await the government orders allowing large gatherings. Unable to host in-person audiences, many groups are sharing new or old programming online. But while the shock of the sudden, mid-March shutdown is wearing off, arts leaders around town remain uncertain about the future, and about everything from how artists will function to where their audiences – and their funding – will come from.

“We’ve all come to terms with, I think, the day-to-day anxiety,” said Mitch Swain, executive director of the Greater Pittsburgh Arts Council, an advocacy group. “Now we’re all starting to look long-term at how long does it take to come back from this. And what are the kind of things that we can do to bring the arts back so that people can start to have experiences with each other again.”

As the shutdown turned routine, part of the solution for many groups has been to go virtual. “Now that we’re just sort of in this indefinite holding pattern, we’ve transitioned working-from-home into, ‘Well, we’re here, what can we do to make the most of it?’” said David Oresick, executive director of the Silver Eye Center for Photography.”There’s very few performing endeavors that we can do that involve no one touching each other and everyone six feet apart”

Silver Eye created the weekly series Studio Visits with Silver Eye, comprised of podcast interviews with photographers, paired with YouTube slideshows of their work. Museums from the Carnegie Museum of Art to the August Wilson Center for African American Culture are offering online tours of exhibits or of selections from their collections.

Performing-arts groups have migrated online, too. Pittsburgh Public Theater launched Playtime, a weekly series of live play readings with full casts. The series has included classics like Oscar Wilde’s “The Importance of Being Earnest” alongside works by Pittsburgh-based playwrights.

“It’s been great, actually,” says artistic director Marya Sea Kaminski. The performances, on Thursday and Friday nights, stream on Zoom and Facebook. “Between those two, we can have like a thousand folks watching per night. So a couple thousand per week. And we’ve had visitors from 18 different countries,” she said.

Kaminski takes those numbers as a positive sign. “It’s a great time to watch television, it’s a great time to read books, but [audiences] still want to connect to a live experience, they still want to connect to living artists and to each other,” she said. “So we think that there’s some opportunity to do that and a great need to do that, even if we can’t gather using all 600 seats of the O’Reilly Theater, downtown.”

But what does the post-shutdown future look like? Art museums in Germany, where the coronavirus struck early, have announced reopening dates, and there are early signs that some aspects of in-person culture in the U.S. might soon return.”I think it would be probably an exaggeration to say it will be business as usual”

The Public’s 2020-21 season is set to begin in September. But as with every other arts group in town, it’s impossible to say whether the troupe will proceed in the accustomed fashion. The Deutschtown Music Festival, set for July, was canceled; the small Millvale Music Festival, set for May, was postponed until August, and even that seems optimistic to some.

“Our goals right now are to continue programing, through the summer, through the fall, into the winter and to deliver a full season,” Kaminski said. “I think it would be probably an exaggeration to say it will be business as usual. We’re still waiting to see how many people can gather and when. So we’re looking at all kinds of options, like outdoor performances, and what our presence can be online.”

Others are wary too – not least because no one knows when audiences themselves will feel comfortable visiting galleries, where it’s usually easy to keep a distance, let alone theaters, sitting side-by-side with strangers for a few hours.

“It seems like doing events is probably a longer way off, events and talks, the really public things, which are really our bread and butter,” said Silver Eye’s Oresick.

Celeste Smith, arts and culture program officer at the Pittsburgh Foundation, says most arts groups she talks to are focused on the present. “The majority of my conversations have been addressing the now, with the thought that, ‘What if this pandemic is not squashed?’ and a lot of reports are saying it’s going [resurge],” she said.

Arts groups – many of whom have had to postpone their big annual fundraisers — are weathering the shutdown in different ways. Many have furloughed workers. The Pittsburgh Symphony Orchestra just announced salary reductions. The Public, Silver Eye, and the New Hazlett are among those who have gotten federal stimulus funds designed to keep full-time staffers on payroll (even though there’s less work to do). Others have applied for help from the Emergency Action Fund (administered by the Pittsburgh Foundation), or nationally based organizations including Americans for the Arts and the National Endowment for the Arts. (There are also emergency resources available for individual artists.)

Conrad said some funders have loosened restrictions on how money can be spent, freeing it up for general operating expenses.

Meanwhile, the stock-market decline that accompanied the pandemic was a huge hit on the portfolios of the foundations and individual donors who are crucial to the survival of most nonprofits.

“The whole sector, ourselves included, is feeling, ‘What’ll be people’s giving capacity over the next year or two, or three or four?” said Oresick.

Smith, of the Pittsburgh Foundation, said it was too soon to speculate about what effect the shutdown and a predicted recession would have on arts giving. Especially when philanthropies are in the midst of helping meet basic human-service needs during the pandemic.

But one harbinger might be the Allegheny Regional Asset District, or RAD. In 2019, RAD distributed more than $15 million to local arts and culture groups. But RAD is funded by the county’s 1 percent sales tax, and the shutdown has cratered retail. “We’re expecting a big hit,” said spokesperson Shannon Musgrave.

How big won’t begin to be known until next week, when sales-tax revenue figures for March, half of which was consumed by the shutdown, come in, she said. April will surely be worse. Musgrave said that RAD, as it did during the 2008 recession, expects it will have to withhold some portion of promised grant money from arts groups, at least temporarily. (As the economic recovery from the 2008 crash progressed, funds were restored.)

While RAD has a reserve fund of $21.6 million, Musgrave said, with something as large as the pandemic, “that reserve goes pretty quickly.” (RAD, by the way, also provides crucial funding for the county’s libraries, parks and trails.)”I think that we’re going to move into a moment of real austerity in the nonprofit arts community”

“I think the general conversation, not only in Pittsburgh, but across the national [environment], is about scaling back,” she said. “I think that we’re going to move into a moment of real austerity in the nonprofit arts community.”

But perhaps a bigger lasting change will be the addition of online programming for arts groups who previously did little. It’s not really a big money-maker yet – most groups so far just request donations. But in addition to compensating for social distancing, virtual programming can be done relatively inexpensively. It can also help groups expand their audiences.

“We’re now kind of presenting to the whole world in a sense,” said Joseph Hall, executive director of the Kelly-Strayhorn Theater. Hall started work just two weeks before the March 16 shutdown. The group, known for its cutting-edge dance programs, has launched KST Global Stream, an online programming initiative that includes both his own series of interviews with national arts leaders and performances translated to the virtual realm.

Groups will have to innovate, he says. “Maybe that means streaming a performance live as it’s happening, or making that available afterward. But it’ll have to be a mix of virtual and in-person programming going forward.”

In any case, arts leaders say, the world looks a lot different than it did just six weeks ago.

“At first we were like, ‘Well, we’ll just press pause on the program, and pick up wherever we left off whenever this is over,” said Oresick. “And now we’re seeing it’s a lot more complicated than that.”