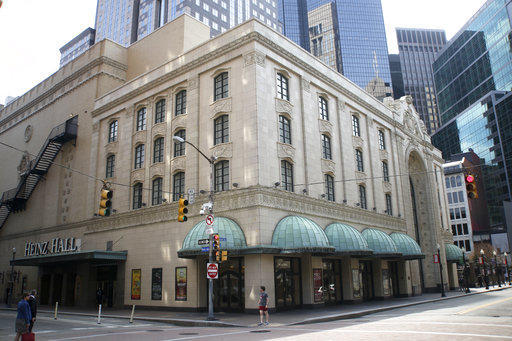 Passers-by move around Heinz Hall, the home of the Pittsburgh Symphony Orchestra, on Monday, April 3, 2017, in Pittsburgh. (AP Photo/Keith Srakocic)

The furnaces at Pittsburgh Glass Center have gone cold. It’s a small but poignant metaphor for an arts scene in almost complete shutdown during the coronavirus pandemic.

The Glass Center, like every other nonessential business in the state, closed last week, and its two furnaces were too expensive to keep heated to their usual 2,100 degrees Fahrenheit during the indefinite layoff, said executive director Heather McElwee. So technicians gradually cooled the furnaces (going too fast would damage them) and unloaded the colorful, delicate glass art inside.”We’ve heard this might go well into the summer”

Come April 1, the Center, based in Friendship, will institute a 50 percent furlough for its staff of 21, meaning full-time workers will go to 40 hours, and part-time workers will take a proportionate cut. That makes it one of a growing number of arts-and-culture groups undertaking personnel moves during the crisis. Last week, for instance, City Theatre announced it would furlough most of its staff. And on Monday, the Carnegie Museums of Pittsburgh extended their planned shutdown for two months, deep into May, and announced they would furlough half their employees – about 500 workers, most of them part-time.

Less than two weeks into the shutdown, arts groups are coping in different ways, including creating online programming, from live and recorded performances to virtual gallery tours. But as the crisis unfolds, Pittsburgh looks unlikely to have much of an in-person cultural scene for many weeks to come.

Today, the Pittsburgh Cultural Trust, the region’s largest presenter of performing arts, canceled all programming through May 10. “We’ve heard this might go well into the summer,” said Carnegie Museums president Steven Knapp of the shutdown.

GPAC executive director Mitch Swain said arts leaders are asking questions like, “‘How are we going to reschedule so many events and fundraiser that we’ve had to postpone or cancel. When can that happen, and will the public come back to see us?’ And [there’s] a lot of anxiety about what’s going to happen next, and how long this is going to last.”

In addition to lost revenue, personnel issues, and canceled fundraisers, some groups might have trouble paying rent – or collecting it from other arts groups they lease space to.

The region has more than 800 nonprofit arts-and-culture groups, according to a survey released this year by the Greater Pittsburgh Arts Council (GPAC). Together, the organizations employ more than 15,000 full-time, part-time, and contracted workers. But individually, most groups are small, with budgets under $250,000.

For larger groups, like the Carnegie Museums, the stresses of a shutdown include high overhead: lots of employees, and large facilities to maintain. In the case of the venerable Carnegie – which includes the museums of Art and Natural History, the Carnegie Science Center, and The Andy Warhol Museum — it’s also got an endowment it can draw on to tide it over. The museum anticipates losing about $1.4 million a month while it’s closed, said president Stephen Knapp. For now, it’s taking $1.5 million from its endowment.

Smaller groups don’t have such options. “In the best of times, we know that cultural institutions are inadequately capitalized,” said Janet Sarbaugh, vice president for creativity at the Heinz Endowments, one of the region’s major arts funders.”We were having a spectacular year”

For City Theatre, the shutdown struck at an especially bad time. “We were having a spectacular year,” said artistic director Marc Masterson. Ticket sales were strong, and the 45-year-old group had just opened its new production studio on the South Side. March is usually the group’s biggest month for earned revenue, including single-ticket sales for current shows and subscriptions for next season. The cancelations and postponements left City Theatre short an estimated $450,000 on a budget of about $3 million.

Revenue streams also vary widely among nonprofit arts groups. The average Pittsburgh arts group earns about 35 percent of its budget through sales of tickets and other goods and services, according to GPAC. Higher percentages of earned revenue are usually seen as a sign of strength. But the Glass Center’s McElwee said that’s not necessarily the case during a pandemic.”Our staff understands these are really unprecedented times”

“In some ways, I think the organizations that are being hardest hit from a nonprofit standpoint … are those that do have really, strong earned revenue, because it took such a sharp decline when we had to cancel everything.”

The Glass Center earns about half its revenue, mostly from classes. But the group now assumes that in addition to shuttering for spring, it will have to cancel all its summer programming as well, including its signature intensive glass-art courses that draw instructors and students from around the world.

“Our staff understands these are really unprecedented times, and I think for our group of folks, people were willing to give up a little bit in order that to make sure nobody was getting laid off,” said McElwee.

For Attack Theatre, the trouble just now is not canceled performances – its next production is scheduled for May 20 – or even by the postponement of its big spring fundraiser until fall. Rather, it’s the loss of the in-school educational programs for students and teachers, which supplies more than 60 percent of its revenue, said Himberger.”We cannot immediately or even in the medium term restore it to its former place”

Attack hasn’t furloughed anyone on its staff of 17, Himberger said Tuesday. “We have made the decision to keep our staff intact, knowing there are economic and financial repercussions of making that decision.”

The cancelation of performances can be devastating for individual artists, as well. Several efforts are underway to channel emergency funds to local artists who’ve lost work, including GPAC’s Emergency Fund for Artists and a GoFundMe campaign run by local artists.

For organizations, a bigger long-term concern might be contributed revenue of the sort that supplies two-thirds of the budget of the average arts nonprofit, according to GPAC. That includes donations from foundations, individuals and corporations, as well as government funding.

Foundation support for the arts is strong in Pittsburgh, and philanthropies have been talking with arts groups behind the scenes. But now foundations have additional priorities, including direct emergency services for people hurt by the shutdown, like food, shelter and health care. The losses to the cultural sector caused by the shutdown will be large, says Sarbaugh.

“We cannot immediately or even in the medium term restore it to its former place, to the way it was even a few months ago,” she said.”I think 2008, 2009 was probably a piece of cake compared to what we’re dealing with right now”

Then there’s the stock market crash, which has devastated the portfolios of both foundations and individual donors. Another keystone of local arts funding is the Allegheny County Regional Asset District, which administers revenue from the county’s sales tax; the effect of a temporary widespread shutdown of the region’s retail sector on RAD funds is yet to be seen.

Many arts groups survived the 2008-09 recession, though it took years for funding for most arts groups to return to pre-recession levels. But Melia Tourangeau, CEO of Pittsburgh Symphony Orchestra, says this time is different.

“I think 2008, 2009 was probably a piece of cake compared to what we’re dealing with right now,” said Tourangeau, who at that time headed Utah Symphony / Utah Opera.

The financial repercussions will likely take years to play out.”We’vee had everyone saying, ‘We’re behind you, we cannot wait for you to come back'”

“What we’re really concerned about is individual giving, and kind of the long-term impact for foundation support for the 12-, 18- and 24-months time period,” said Himberger.

The new normal might require big changes in how groups operate. “That’s going to make everybody have to make very hard decisions, and perhaps make an opportunity to do business differently,” said Sarbaugh. She said nonprofits might have to look harder at sharing services and work space, and at collaborating more.

For now, one way groups are coping is by asking ticketholders donate the tickets they bought to canceled shows. Many say the response has been positive.

“We’ve had almost no request of refunds to this point,” said City Theatre managing director James McNeel. “We’ve had everyone saying, ‘We’re behind you, we cannot wait for you to come back.’”

Others expressed optimism as well. Mark Southers founded Pittsburgh Playwrights Theatre Company 16 years ago. The troupe’s known for its stellar productions of August Wilson plays, and Southers runs it on a shoestring (with help from the Cultural Trust, which provides the company’s below-market rent Downtown).

Southers said to keep in mind that artists are a resourceful bunch.

“One thing we know that art always survives, you know what I mean?” he said. “It’s just a matter of how it survives, and when will it be out in the sunshine again.”

[Editor’s note: This story was edited to accurately reflect the nature of the furloughs at Pittsburgh Glass Center.]