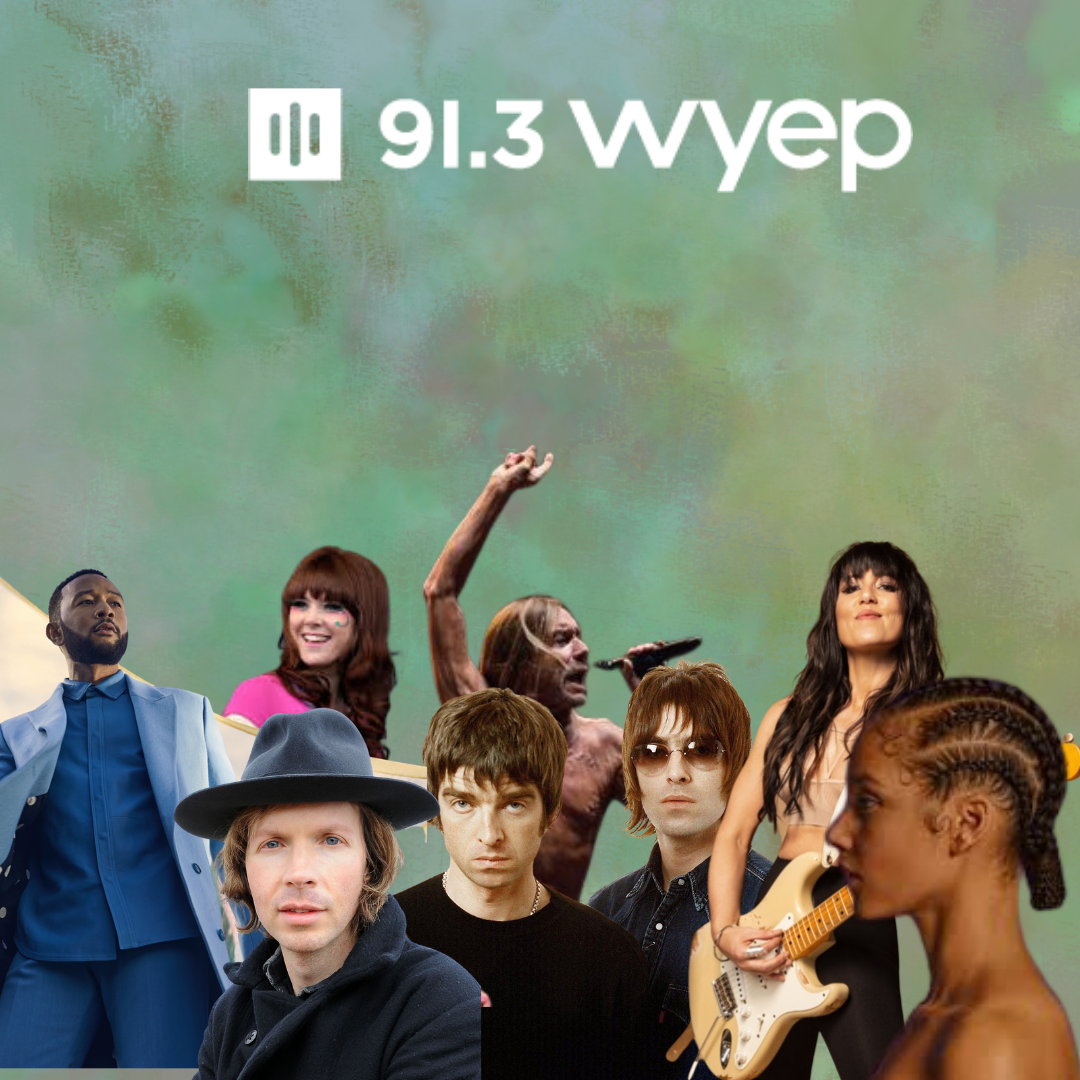 We combed through the last 30 years of music and curated our list of the greatest 600 songs.

There are a lot of great songs that pay tribute to the Golden State. “California Love” was a comeback single for 2Pac. Originally intended for a Dr. Dre album, 2Pac wrote his bombastic, celebratory verses in fifteen minutes. Add a funk-influenced futuristic video and you have a party anthem that stands the test of time. (LF)

“Angels” could be Chance the Rapper’s theme song. A standout on a mixtape full of standouts, the Chicago native pays tribute to the city “where I stay.” It’s a playful song about his hometown, but the title hints at some darker realities (“there’s too many young angels on the South Side”). The gospel influences and bravado might remind you of another, more famous Chicago rapper who has since moved out to the west coast with Kim, but from the opening lines, “Angels” makes it clear: Chance won’t abandon his roots or his hometown. (LF)

The English rock band likely has enough critical accolades to pack a room by now, and their reinvention of a kinder, gentler prog-rock sound in a mold reminiscent of Peter Gabriel. This single from their 2017 album Little Fictions is a gauzy portrait of a young family on a beach, but the deceptively urgent guitar and sweeping orchestration are enough to make a listener weep with joy. (MS)

Electronic, “Get the Message”

The Smiths’ Johnny Marr and New Order’s Bernard Sumner teamed up at the final sunset of the 1980s to form this band, they had a lot of collective experience in crafting hypnotic, layered songs that became almost cultish favorites. This track—their second single—hit that nail very much on the head. It starts simply but adds more sonic elements as it progresses, eventually unwrapping into one of the best of its era of early ‘90s dance-rock. (MS)

The Grateful Dead, “So Many Roads”

A young man couldn’t sing a song like “So Many Roads.” We’d just never believe it. On the other hand, when Robert Hunter gave Jerry Garcia the lyrics to the song in 1992, the pair had already traveled more metaphorical roads than most of us would ever have the fuel for. This song was never recorded on an album, though. Jerry didn’t make it that far on this particular road. It does live on, however, in the hearts (and on the tapes) of Grateful Dead fans the world over. This performance, from Star Lake Amphitheatre in Burgettstown in 1992, is without question the most powerful version to come from Jerry’s mouth, guitar, heart, and soul. Go ahead and try to not cry with this one playing. (JS)

It’s a damn shame that Harvey Danger will only ever be remembered for “Flagpole Sitta.” Yes, it’s a great song, but it doesn’t come close to touching the magic conjured by Sean Nelson and company on the rest of the band’s three albums. “Old Hat” teems with literary allusion, smart wordplay, and an emotional depth not often reached in the crunched out, squealy guitar world of 1990s Alternative Rock. Is the line “Like a simile, I paint suggestive pictures … of me and you,” the greatest joke your high school English teacher never made? Maybe. Either way, it does paint a picture that deserves to be displayed in a gallery somewhere other than the Museum of One-Hit Wonders. (JS)

Lauryn Hill’s solo debut, “The Miseducation of Lauryn Hill,” is full of great songs. “Ex-Factor” (reportedly) tells the story of her romantic split from fellow Fugee Wyclef Jean, but its lyrics will be easily understood by anyone who’s gone through a difficult breakup. Like all the best breakup songs, it’s sad, but Hill’s skilled, soulful singing is a balm. (LF)

This landmark debut hip-hop release recently turned 20 and sounds as fresh today as on its release date. J-5 were part of the West Coast underground rap scene. Four rappers take part on vocals this track, combined with beats, basslines, samples, and scratching make the retro-rap seem modern and moving. It’s also one of the grooviest, head-bobbing songs of the past 30 years. (KS)

Eric Clapton has acknowledged the impact of the blues on his career many times, including working with some of his heroes. “Riding With the King” is the perfect song to record with the legendary B.B. King. Not only does it play on King’s name, it is written by one of America’s great songwriters, John Hiatt. Both King and Clapton are in rare form as they trade licks and lyrics, obviously enjoy each other’s company. (RW)

Originally thought of as a look into our recent struggles as a society. “Dark Days,” the band has claimed, is actually about the intensity of first loves and looking out into their usually sunny California weather on a gloomy day. Originally out in 2016, they recently remixed the track this year, with the vocal additions of Sylvan Esso. (KS)

McMurtry’s evocative songwriting perhaps hit its peak on this 2005 album track. Like Neil Young has done throughout his career, McMurtry channeled his anger about American economic opportunities into a lengthy epic brimming with clever wordsmithing and intertwined guitars. (MS)

This Boston band evolved during a very active period for alternative music in their native city. “Buena” was not your typical alternative band cut, nor did it achieve widespread commercial success. It did combine rock, jazz and blues along with lead singer Mark Sandman’s unique smokey bar crooner-style. The combination of all these elements, gives this song a timeless feel with a homemade two-string bass and baritone sax. (KS)

The British singer-songwriter emerged in 2003 with a Nick Drake-inspired sound, memorably catchy songs, and an expressive voice. He joined a growing “quiet is the new loud” wave of the time, along with Kings of Convenience, Sun Kil Moon, and Dolorean, among others. This song made an immediate impression on music fans and was included in multiple movies and TV shows to help set a mood. (MS)

“Gronlandic Edit” is one of many of Montreal songs that address depression and anxiety while still sounding ridiculously upbeat and kind of funny. Who else except of Montreal’s Bowie-esque frontman Kevin Barnes could make the never-ending line “I just want to hold the di-vi-i-i-i-i-i-i-i-i-i-i-i-ne in mind” sound actually divine and not totally annoying? When the layered chorus kicks in, it’s particularly fabulous – especially when you learn that Barnes created these densely layered sounds by himself on his computer. There’s still not much else like it. (LF)

Pedro The Lion, “The Fleecing”

David Bazan is one of America’s greatest songwriters. For decades he’s helped people make sense of the world through his songs about faith, relationships, and the mysteries of the human condition. On “The Fleecing,” Bazan reminds us that he knows as little about these interconnected mysteries as the rest of us. He’s just got a gift for asking the tough questions with an eloquence that is rarely matched. Sonically, “The Fleecing” is a bit of a window into the future for Bazan and his music. That unexpectedly good synth solo hints ever so slightly at the direction his music would take in the future. (JS)

This classic alternative rock cut from The Pixies stands out from their 1990 album, Bossonova. Like many songs from The Pixies, the song itself draws the listener in, repeating the chorus “I’m digging for fire” within the quirky, and catchy arrangements. Asked to describe the meaning of the song years ago, Frank Black, in an interview with Music Express in 1990 said “It’s all nonsense, a bad Talking Heads imitation. Just like any other cool rock ‘n roll song or pop song, the content isn’t what hits you.” (KS)

The Promise Ring, “Why Did We Ever Meet”

The Promise Ring may have created the quintessential emo record with Nothing Feels Good in the fall of 1997. Full of frantic contemplations on what it means to grow up (or to live at all), this inspiring album went on to launch a million ships, as they say. “Why Did We Ever Meet” finds Davey von Bohlen asking a question we’ve all painfully asked ourselves, a higher being, the universe: Why? The what doesn’t really matter. It’s the why that gets you in the end. A few years later, von Bohlen found himself asking that same question when he made a guest appearance “A Praise Chorus” from another genre-defining album – Jimmy Eat World’s “Bleed American.” (JS)

After a 20-year hiatus, Steely Dan returned to claim a long overdue Grammy Award for Album of the Year in 2000. The title track features crisp production, impeccable engineering, driving percussion, strutting sax, and a muted horn section. Despite being surrounded by talented studio musicians this track highlights the masterful musicianship of Donald Fagen on keyboards and the late Walter Becker on bass, rhythm and lead guitar. The pair slide between major and minor chord, and jazz and R&B influences. (RW)

Sufjan Stevens, “Too Much”

“The Age of Adz,” Sufjan Stevens’ long-awaited follow-up to his Illinois album, is one of indie rock’s ultimate career left turns. In the five years between those releases, Stevens had grown bored with indie folk and even his own singing voice. “Too Much” is not only a great song, but the perfect description of his new sound: densely layered experimental electronica. Stevens can’t completely escape his past, though; melodic horns, wind instruments, and an uplifting sing-a-long chorus shine through the noise on the paranoid love song “Too Much.” (LF)

The literate songwriter is the one who causes you to pull out the lyric book and read while you listen. Sting offers memorable lines that seemed to be ripped from the great poet’s books. The physical world connects with the emotional world in this gorgeous love ballad that acknowledges the bittersweet and fleeting aspect of even the most perfect day or perfect of loves. (RW)

Superdrag was pretty smart about things. The Knoxville band saw some success early on with its first single, “Sucked Out,” in 1996 which led its record label to believe that shoveling money at the band would get them back into the studio to crank out a few more hits. Instead, the band took all that money and used it to acquire every possible resource with which to create a studio masterpiece, figuring they wouldn’t get the opportunity again. “I’m Expanding My Mind” sets the tone for its magnum opus, “Head Trip In Every Key.” A simple acoustic riff coupled with warm bottleneck accents and John Davis’ yearnful delivery make this song an easy choice for repeated listens. (JS)

Amelia Meath and Nick Sanborn are the North Carolina electro-pop duo that created this top-notch shake it all out on the dance floor track, that also is a serious jab at mainstream radio’s constraints and programmers. Ironically, this song has become their most notable and widely played track so-far, in their career. (KS)

For a songwriter who has shown a passion for dramatics, “Beautiful Child” carries more than its share of flair. “Beautiful Child” is a cacophonous celebration of life, with swirling strings and a brassy horn rising above the chorus of voices (note the nod to The Wizard of Oz in the arrangements). Taking center stage is the singer reminding himself – and you – to not lose touch with the child within you. (RW)

For all his bravado and gruff vocals Tom Waits is a softy, a man with a golden heart, an ear for melody, and a soul that recognizes the delicacy of life. His grasp of nostalgia, his empathy for characters, his poetic genius, is a recipe for songs that embed themselves in your psyche. “Hold On” captures the fragility of survival, and with lines like “If you live it up you won’t live it down,” you may find yourself quoting the man. (RW)