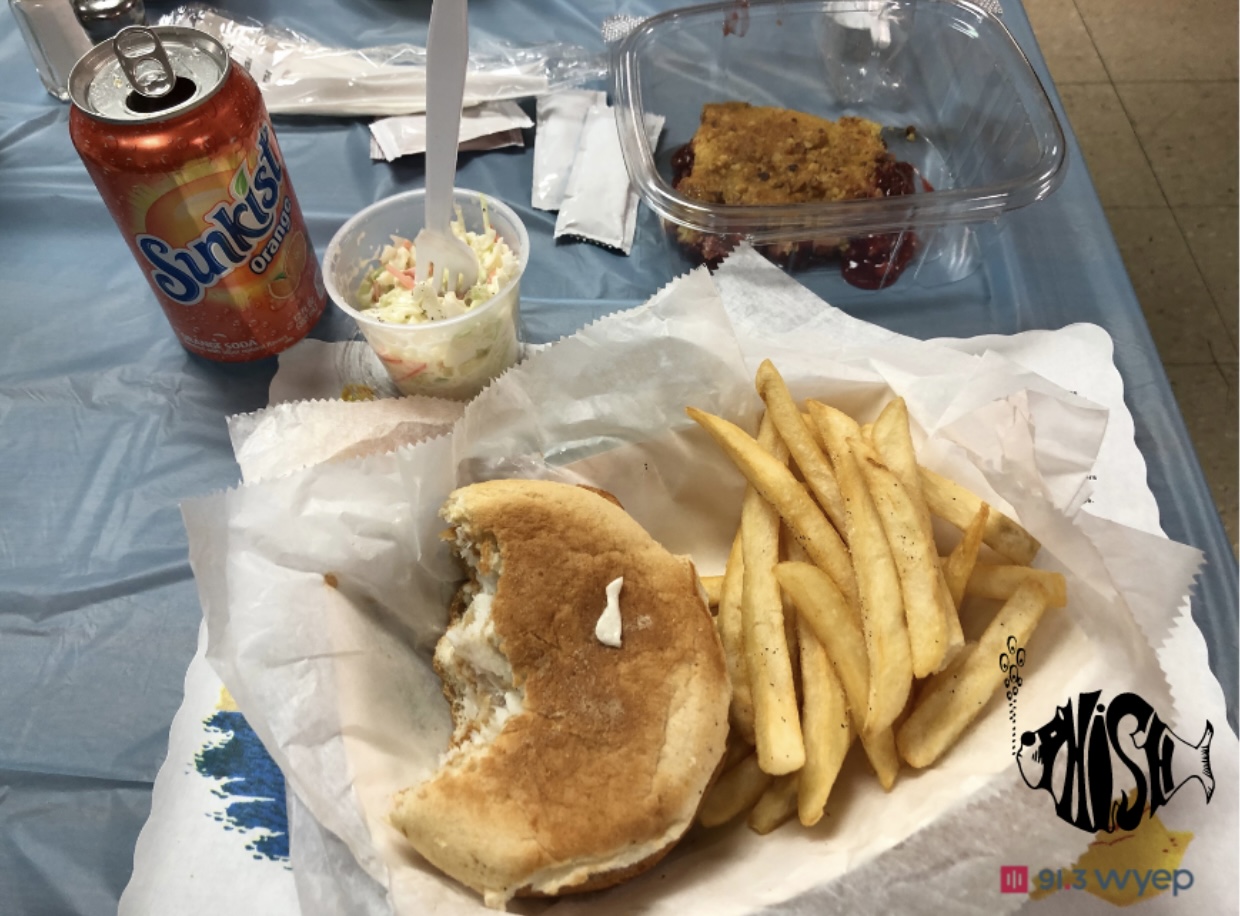 With a pun so easy we just had to make it, we present the Friday Phish Fry. Listen to the Morning Mix on Friday mornings around 9:40 a.m. as Chef Joey serves up 40 days and 40 nights of exquisitely tasty jams from Vermont’s best catch: Phish!

We’ll get the party started this Ash Wednesday with a spectacular and truly blissful “Stash” from the summer of 2021. “Stash” debuted in 1990 and has been played a total of 429 times since. is a meticulous jaunt into the minds of Phish as students of music. Learn more about the history of “Stash” here and watch this performance from Noblesville, Ind. from Aug. 7, 2021.

It’s a big day for fish fans in Pittsburgh, so let’s check out the opener of a big show for Phish in 1995. One of these years, I’m going to get to NYC for Phish’s New Year’s run (which always includes a birthday show for me on 12/30), but in the meantime, we can pretend. Commenting on this song is Ernie Francestine from the Pittsburgh band The Buckle Downs who says, “Taken from Phish’s biggest concert ever at the time, New Years Eve 1995 represented a turning point that saw the band playing bigger venues. This version crackles with the energy of New York City in 1995.”

Learn more about the song “Punch You In The Eye” here, and take a listen to the entire 12/31/1995 show wherever you get your streams and stuff.

It’s the 2nd week of Fish (Phish) Fry Season and a great time to try something new. Maybe last week you devoured your ‘ol faithful, your go-to, your island in a sea of choices. This week, branch out. Try a new spot. GET THE SHRIMP!

With all that in mind, today we’re listening to “Horn” a dark song from the concept album Rift. For longtime Phish fans, Rift is the stuff of legends and oft-cited as a favorite studio release. For normal folks, Rift doesn’t get much attention, coming before the band’s commercial breakthrough the following year with Hoist (which features a horse on the cover because “The Horse” is the only song NOT drawn into the album art of Rift). Also of note is the song “All Things Reconsidered” – a variation on the theme of NPR’s All Things Considered. Exhausting, right? Sometimes that’s what makes it fun.

Phish dot net calls “Horn” the “sad confession of a human doormat.” This is accurate. Think of the album like prog-emo and enjoy the filth oozing from this riff.

The Drive-Thru (Or, More Realistically, The Stuck In The Car That Should Be Moving) – March 18, 2022

Many of us spend a ton of time in cars. Sometimes it’s fun – maybe you’re on your way to another city to see your favorite band play live. Other times it’s just miserable – I’M ONLY TWO MILES FROM WORK WHY IS IT TAKING SO LOOOOOOONG?

This week, we welcome Nick Ross – Chief Traffic Engineer for Pittsburgh’s Department of Mobility and Infrastructure. Keep his name in mind next time you feel like a slave to the traffic light.

Nick says, “If I had to pick one song to hear at every show for the rest of my life, it would be a set-closing Slave.”

“A classic as old as the band,” he says, “This song’s composition and symbolic lyrics epitomize the tension and release style that sets them apart. Its blissful, melodic composed section slowly builds into a euphoric release as the jam peaks into a raucous crescendo of full-on rock n roll. See the city, see the zoo, traffic light won’t let me through. Whomst amongst us can’t relate?”

Thanks, Nick! It ain’t so bad being stuck in the car when you have good music. Watch a killer set-closing “Slave To The Traffic Light” from 12-7-1995 in Niagara Falls.

As with most things in this life, if you look hard enough, there’s usually a Pittsburgh connection. Today we travel all the way to an abandoned Air Force base in New York to find it.

“Ya Mar” is, according to Phish dot net, the cover song most likely to be confused for a Phish original. Legend says that bassist Mike Gordon heard the song, performed by The Mustangs, while vacationing in the Carribean, returned home, and taught it to the band. That’s only half-true. The Mustangs did record the song, but it was written and first performed by Cyril Ferguson.

Okay, so what was it about that Pittsburgh connection, you ask? Well, in August of 1996, Phish held their first of many multi-day festivals – The Clifford Ball – in Plattsburgh, NY. Yes, I know it says Plattsburgh, but keep reading. The idea for the name came to the band in 1991 while in Pittsburgh’s airport. There, they saw a plaque commemorating Clifford Ball – a renaissance man born in Banksville in 1891. According to Phish Manager, John Paluska, “The band was walking through the airport in Pittsburgh one day, and they came upon a small, little plaque of a guy named Clifford Ball… it said ‘Clifford Ball: a beacon of light in the world of flight.’ They just thought the [expression] was the funniest idea for a show…”

Thanks to Pittsburgh musician Ernie Francestine for this one – and for cluing me into that Pittsburgh connection. You can still see Cliff on some PAT buses around town!

We’ve got a special guest this week and he’s not picking a song, but playing one! Josh Verbanets is the leader of the Pittsburgh power pop band Meeting of Important People. Josh was kind enough to play a Phish cover while we were talking about a few things on the radio.

Most Phish people have strong opinions. Sometimes those opinions are right and other times they’re wildly subjective. Josh has an opinion on the song “Farmhouse.”

Now, before we get to that, I should say that “Farmhouse” is the first Phish song that I consciously listened to. I had heard of them, but it took a cute girl at driver’s ed class drawing the Phish logo on her worksheets to really spark it for me. I had my mom take me to Best Buy on McKnight after class and I scooped up Farmhouse on the day it was released. After that, I grabbed every album I could find and basically never looked back.

I’ve heard hot takes about just about every aspect of Phish. Today I heard a new one. Important Person Josh says that “Farmhouse” needs a different structure and he showed us what he meant. I’ll let you decide. THANKS A ZILLION to Josh for doing this. It’s one of my favorite moments of live music on WYEP ever.

Siblings Day is this weekend and I am truly blessed to have a great relationship with my brother Bob. Bob is the rock of the family, the most dependable guy you’ll ever meet, a brilliant teacher, uncle, son, brother, and friend. Anyway, we were talking in the tub the other night about some great shows we’ve seen. One of our favorites happens to also be our first Phish concert. The insanity of 7-29-2003 is well-recognized and documented. It’s a show so good that it was released commercially before Phish started releasing every show. It was a special night.

2003 is a year of soaring highs and crushing lows for the band. They went on hiatus in 2000 and returned in 2002 only to disband again in 2004, staying away for 4 years. 2003 saw Trey struggling with addiction while trying to keep the traveling circus on the road. Some nights were bad and others were transcendent. Star Lake 2003 is transcendent. This summer tour has been called the iPod tour because the band put every song they knew on an iPod, hit shuffle, and built their setlists from there. Star Lake saw some major bust outs, some extended jamming, and even a vacuum solo. How lucky can you get to hear “Daniel Saw The Stone,” a 20+ minute “Crosseyed and Painless,” and a full-on “Harpua” at your first show?? Believe me, I still feel lucky.

So, back to Tub Time… I told my brother I was playing “Brother” from Star Lake for the Phish Fry today and was seemed genuinely surprised. “I don’t remember them playing that,” he said as he remembered he actually snoozed on the lawn through the second set, sent off to dreamland by a few High Lifes and a belly full of chicken our friend Phil cooked up in the parking lot. It wouldn’t be the last time my brother slept through a Phish show. It’s truly an amazing talent.

Happy Siblings Day to you and yours. Get some good Tub Time in if you can. Here’s fan-shot video from that night with good audio.

We did it! We spent 40 days in the desert and came out on top. Congratulations. Well done.

Having said that, Easter doesn’t really rank as a “Phish Holiday.” It’s no NYE at MSG. It’s no Labor Day at Dick’s. It’s certainly not Halloween.

Halloween is a special day for Phish fans as they wonder what the “musical costume” will be. The first musical costume set took place on Halloween 1994 at the Glen Falls Civic Center in New York. The band polled fans about what album they’d like to hear and the overwhelming response was The Beatles’ “White Album.” The following year, Frank Zappa’s sprawling rock opera Joe’s Garage was the clear winner, though the band decided to go the less-offensive route with Quadrophenia by The Who.

In 1996, Phish decided to keep the suspense high and surprise the audience with a pick of their own – Remain In Light by Talking Heads. It was a great choice. They brought in horns (Dave Grippo and Gary Gazzaway) and percussion (Karl Perazzo) and absolutely killed it. The set was inspirational not only for fans, but for the band, as well. They’d take some cues from the Talking Heads on their late 90s albums while “Crosseyed and Painless” remained in rotation permanently, providing a spectacular vehicle for jamming.

This week, we get a pick from my pal Shannon Joy who is probably the biggest Talking Heads fan I know. Seriously. It’s borderline aggressive, but music is passion, man, and Shannon’s got the passion. “Crosseyed and Painless” is the best way to open the second set, she says, and having witnessed that in person at my first Phish show, I can’t really argue against it. Shannon’s the kind of person that stalks the setlists of every show leading up to the shows she’s going to, just to see if it might happen. She’ll even wear a Talking Heads or “Crosseyed” t-shirt for good luck if it’s still on the table. Here’s proof from Hershey last summer.

Anyway, “Crosseyed and Painless” is a total ripper and a welcome addition to any Phish show from its debut in 1996 to the most recent version from the “Moon Palace” in Mexico this past February. My favorite is the one they played at Star Lake in ’03. Shannon’s favorite is from the Bill Graham Civic Auditorium in August of 2012. This one, though, is where it all began…