The Moat Rats began as a group of bored band and chorus kids a few years out of high school that missed making music. Initially a rotating lineup of almost a dozen musicians, The Moat Rats have tightened up around lead singer Karli Blotzer. Their new song “Outta Sight” came quickly as the band were recording some other songs and deals with breaking co-dependent habits and leaving some room for yourself.

We began The Moat Rats actually as a bunch of bored band/chorus kids a few years out of high school who really wanted to play music again.. it was kind of a Sublime/Slightly Stoopid cover band if I’m gonna be honest with a rotating lineup of about 10-12 of us… of course that included 3 different bass players. Myself (Karli Blotzer – lead vocals), James Held (drums), Brad Lang (rhythm guitar) and Liam Kress (keyboard/vocals) are the remaining original members but we held on to Haley Held (bass guitar) for as long as we could. There’s nothing quite like having twins as your rhythm section..

The crew just mentioned shifted the focus to writing original music and put out the charcuterie board that is our original EP Sunday Gravy (2018) along with single “Fool’s Gold” (2019). Throughout that time, we acquired Dylan Davey (lead guitar) and Justin Benzino (saxophone) filling out our roster and our sound. Haley passed the bass to Daniel Rouse at our “Fool’s Gold” release show at Thunderbird Café and Music Hall November of 2019, and Daniel quickly learned our existing music and was eager to put his spin on the new songs we were incubating. With Daniel, Justin and Dylan adding to the vision our first LP was born, Year of the Rat (2020). Since then, we’ve survived a pandemic and managed to write 5 new songs worth sharing which were brought to Nate Campisi and Larry Luther at Mr. Small’s Recording Studio this past April. 2/5 singles, “Outta Sight” and “Strobe” were released on June 17, 2022 with the support of Back Alley Sound and ROWDY at our release show at Thunderbird Café and Music Hall.

We anticipate the release of another single, “Oh Heart”  on August 27th, 2022 celebrated by a performance at Oaks Theater in Oakmont, PA, with special guests Norside Organ Trio.

As I have learned throughout the years, this question does not get any easier. Ambiguous? Vintage Alt Rock? Jam/Pop Fusion?  Sure…

What draws you to this type of music?

One of our main priorities for this project (The Moat Rats) is to allow all of our voices/influences to be heard. Some songs lean heavy into more jam band/rock vibes, others are more stoner pop, a lot are very theatrical and moody, but all I think are inspired by the music we grew up listening to, for me anyways that was WDVE… thanks dad.

Tell us more about the song “Outta Sight.” What inspired you to write it?

“Outta Sight” came to us in a moment I think we all needed to get out of our own heads. We decided to track these singles as a live band, as we did for YOTR (Year of the Rat) and that led to a bit of redundancy during rehearsals. The Tuesday before our recording weekend, we felt like we should “go in with a back up” song, and also kind of give ourselves a break from these songs we had been playing on repeat for months. We wrote “Outta Sight” in about an hour, wanting to stick true to one genre, Rock and Roll. Funny how it became our favorite song of the bunch… The lyrics talk about the need to break codependent habits, that to love yourself you have to be yourself and allow yourself to take some space to find who that really is.

Like many in my generation, I grew up with an enormous CD case in the car for family road trips. Artists like Blind Melon, Collective Soul, Live, Meatloaf, AC/DC were among my favorites. I didn’t resonate with a particular album though, until my older brother bought me Panic! At The Disco’s A Fever You Can’t Sweat Out LP. I had never heard something like it and it was beautiful.

I think for me it is the feeling of home.  I love this city. James and I live on the Allegheny River, we both come from musical families, all Pittsburgh natives.  I have grown to love it for all that it is, vibrant, eclectic, supportive, imperfect.

Learn more about The Moat Rats: 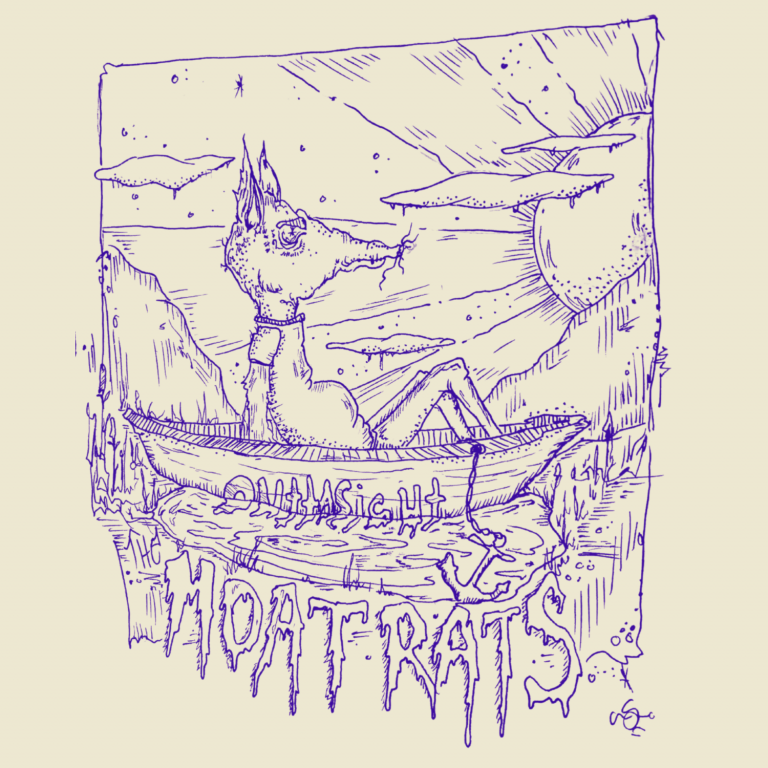