Dave Wheeler fronts this unabashedly hard rock band from a group of Pittsburgh music veterans who may hold the record for longest cumulative hair length from any group of people making music in Western Pennsylvania. Their song “What If I’m Lyin” is about loving yourself even if you’re actually kind of trash. Limousine Beach recently spoke with Morning Mix host Joey Spehar about having nothing to hide, taking inspiration from jealousy, and sweet jumps.

Dave: After Carousel broke up in 2016, Evan, Dan, and Dan contacted me about getting together to jam. I had skeletons of a few tunes so I brought them to the sesh and we decided, “Hey, this works. Let’s keep doing it.”

Tell us more about the song “What If I’m Lyin’.” What inspired you to write it?

Evan: The general idea for “What If I’m Lyin'” came to me when I was thinking about how typical it is to write a love song, but how I’ve almost never heard a song boasting about being a pile of trash and being ok with it. I had the chorus riff, but much like other songs, I showed it to Dave and he made the arrangement. We both pen and papered the lyrics together. I love the nothing to hide mentality.

Dave: The 1995 self-titled debut CD from a band of my high school friends called The Defenestrators (not to be confused with the other Pittsburgh band of the same name that was around in the mid 2000s).

It’s not that I resonated with the music so much. They were going for some kind of proggy jazz pop and I was more into The Who, Led Zeppelin, and Black Sabbath. I was really inspired by the fact that kids my age could perform so adeptly and actually record their own CD. More than anything though, I felt excluded. I was a singer but wasn’t really considered to be a candidate for the band.

The summer before, we all hung out together every night but after the band formed they had all of their little inside jokes and all of a sudden I was on the outside looking in. I decided that I would learn how to play guitar, write songs, and start a band, mostly to spite them. It was a long process and I wasn’t really in a regularly gigging band until about 2004 but I showed them. I showed them all!

So yeah… Their music was good and they were all very competent players, but mainly I was inspired by a petty grudge and my own insecurities.

Fun fact: The bass player was actually Chad Sipes who went on to play in Soda Jerk and now has his own band. We have remained friends and I produced his most recent album!

There’s nothing like the way your guitar sound reverberates off Mount Washington while you’re shredding as you jet-ski down the Mon.

Also, the best is when you’re in the van coming back from tour on the parkway and you just floor it to see if you can get any air off the runaway truck ramp before you hit the Fort Pitt Tunnel. All Pittsburgh musicians know what I’m talking about.

Check out the video for another sizzlin’ song from Limousine Beach called “Stealin’ Wine.” 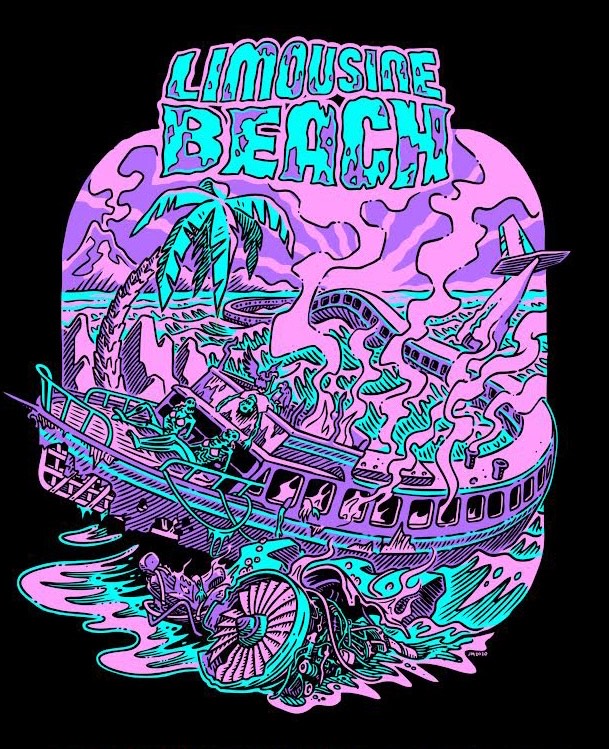 Greensburg’s Essential Machine feel like a massive ball of stress on their new EP “Exponential Crisis.”