Forestry Division is a re-branding of the long-time Pittsburgh band André Costello and The Cool Minors. While retaining the charm and razor-sharp musicality they’re known for, Forestry Division’s new music is built with an intentional lack of urgency as seen on the song “Are We Ready?”

We’ve technically been around for nearly 10 years, but under the name André Costello and the Cool Minors. Starting out as a trio in 2012 with Nick Charters on drums and Matthew Fiorillo on bass. James Hart recorded with us on Rattling Arcade and I tricked him into joining. After that we put out our second LP, Resident Frequencies. Nick needed to step out for personal reasons and we brought in Sean Finn from The Real Sea and The Red Western to cover drums. Rich Stanley came along as a fill-in for when James couldn’t tour, but we quickly realized it just sounds better with him in the band all the time, so we got him to stay. We put out Brighter Than Before with that lineup and then the pandemic happened. We kept recording and working through the pandemic and now have that first Forestry Division album ready to release. This song “Are We Ready?” is the first song we’ve released from it.

What prompted the name change?

The original name was 10 syllables with a triple entendre in it. It honestly just made it a challenge to do something as simple as telling people what the name of the band is. Don’t get me wrong. I think the old name was interesting and clever and adaptable in meaning, but there’s nothing like just saying the name of the band and having people know what it is. I wanted to call this 3rd LP from André Costello and the Cool Minors Forestry Division and told the band. Sean replied that he wouldn’t mind simply changing the name of the band to that. I said I wasn’t opposed to it. Everyone agreed, so we changed it and decided to start fresh with the new name. We started this album in 2017 or 2018. A lot of time has passed. The Cool Minors have grown up!

You tell me, man! For real, I wanna know. I’ve heard it described as folk rock, Appalachian rock, but it’s so much more than that to me. It has been garagey, its been Pink Floydy.  I’ve heard people say experimental and psychedelic. I think there is truth to that, but it’s not exact. Our stuff can be atmospheric. We focus on memorable melodies and feels for songs. We aren’t afraid to have a song have a typical verse-chorus structure, but we look to have each song have be new and different as far as songwriting, structure, performance, texture, althewhile trying to stay tasteful and trying not to alienate to the listener too awful much, but that’s okay when we do.

Tell us more about the song “Are We Ready?” What inspired you to write it?

The single is about two people who love each other. One person is in pain and that pain is getting in the way of being happy. So the other is trying to figure out how to fix it. “Can I reach into your heart and pull out stars?” – a lyric from the chorus. Is it okay if I show you how wonderful you really are inside? We’re all stardust. We’re all made of stars, you know? When one of us is hurting, we all hurt. We can make it better. Let’s do a kind of surgery if we have to.

The White Stripes Elephant was and still is a very important album to me. I would skip “Seven Nation Army” because I love that song, but the meat and potatoes is everything past track one for that album. It was the first time something I heard anything that powerful and brutally honestly real anywhere near the mainstream. It was like it was powered by crude oil all out fossil fuel destroy the planet unstoppable energy. And it was real. It had those imperfections in it that that made it clear this was the expression of a human, and not something created in a lab like practically anything else in the mainstream at that time. Being a person who’s whole identity banks on the idea that imperfections are beautiful, I found those jams from that album and the rest of the stripes catalogue to be highly encouraging and refreshing in my life.

The camaraderie and support from other folks that make music for the love of it. If you go out and give it your all, people are receptive to that dedication and makes it a loving place to be. We’ve been in it for a minute and the folks that we’ve worked with over the years, we’re all growing together. We’re all staying true to ourselves in whatever form and just making the grind and making an effort to continue doing better and better.

I honestly can’t answer that! Practically every band I encounter around town I wish the whole world knew about.

I adore my bandmates. I write more song ideas than I know what to do with and that makes me upset – seriously struggle with that, which is why I have Tomorrow Club and also am working on an Andre Costello album. Gretchen and I’s house turns 102 years old this year. My dog Mochi turned 3 this spring. I really enjoy going to theme parks. I have alopecia. I dabble in depression. I also dabble in the art of bonsai. My brother Mike wrote the book on Conneaut Lake Park. One time I made eye contact with Lawrence Fishburne after he climbed into the front passenger seat of a van in front of the ACE Hotel and he gave me a stoic nod. I’m a graphic designer for an outdoors company. I brew wine in my basement? What do you want, JOEY!? 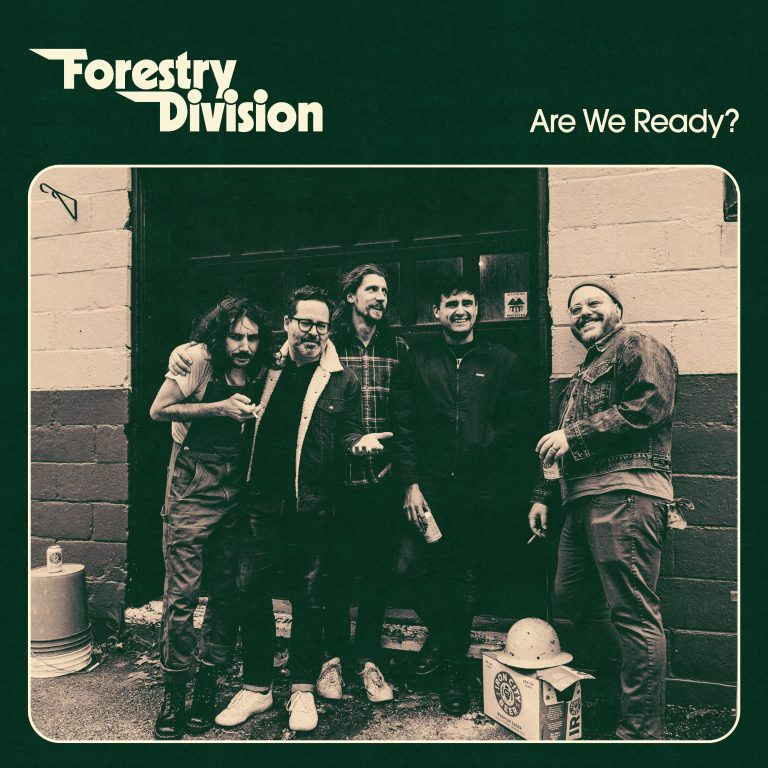