Mt. Joy swung by WYEP’s South Side studios Tuesday, Feb. 25, 2020, to perform a Live & Direct Session ahead of opening for the Lumineers at PPG Paints Arena.

The band plans to release its second album in June, called “Rearrange Us.” In addition to playing the songs “Astrovan,” “Let Loose,” “Silver Lining,” and “Strangers,” Lead singer Matt Quinn chatted with Morning Mix host Joey Spehar about working on the new album, playing arenas with The Lumineers and the struggles of success. Listen to their performance and conversation, or read the Q&A.

Their conversation has been edited for length and clarity.

Joey Spehar: You guys are opening for the Lumineers tonight and I’m curious how you feel about upstaging the headliner, every night. I finally got to see you guys live, in a proper setting, this past fall at the Roxian and I was completely floored by the live performance.

Matt Quinn: Thank you. The Lumineers have been great. I don’t know if there’s been any upstaging because they’ve been great every night. It’s been fun – almost like a learning experience, watching them perform in arenas – something we’ve never done before. We’re always trying to improve our live show and … maybe someday we’ll have an opportunity like they have.

JS: It kind of feels like when this band started you were thrust into this bigger spotlight, maybe quicker than a lot of other bands have been. So playing those bigger stages early on, how does that shape what you do as a band on stage?

MQ: We’ve been a band for a little over three years now … maybe four? … It has been a short period of time, but we’ve played a lot of shows. I think people have this misconception that we just [ended up plaing] in arenas. But we’ve played a lot, and they weren’t all in arenas. There have been some tough, tough shows over the years. It’s been a gradual climb, so I think opening for a band like the Lumineers, I feel pretty good about that slot.

JS: Playing these songs, night after night, what does that do for you personally – as a group? It kind of feels like if you’re in a band, you’re going into battle every night. Is that a fair assessment?

MQ: I think so and I mean … I wouldn’t compare what we do to warfare. That takes more valor than we have. But, yeah, I think there’s a comradery and … part of performing live is developing that comradery and understanding each other as players. Even little things like, you know, we’re playing in arenas for the first time and there are a lot of people there. So if you think someone’s nervous, trying to tell a joke on the stage. Just little things you pick up that go a long way – you can’t really have that if you’ve never played with the people around you.

JS: How does that experience compare to then going off the road and heading into the studio?

MQ: I think they’re like two totally different worlds, but …  some of that definitely carries over in terms of – this record. This time around, we were a band. Whereas before it was like Sam [Cooper] and I put songs together and then found people to play parts or add in their expertise, but they weren’t there at the beginning of those songs. This time around we came in as a band with the experiences that we had live and brought that into the studio. I think it shows. I think the album reflects that.

JS: So, it’s more of a collaborative process this time around?

MQ: Yeah. I think some of the songwriting was done in a similar way, but also, some of it was really collaborative. Either way, all of the playing – not that it didn’t exist in the first [album] – but there wasn’t the time and the chemistry that we had going into the studio. And some of the arrangements were born just jamming together on those days.

JS: “Rearrange Us” comes out on June 5 and not only is that the title of the album, but it’s also a song title and I saw that lyric pops up in another song, too. So obviously it’s a phrase that means something pretty powerful to you. Can you talk about “Rearrange Us”?

MQ: I think going into the process of making the second album, we felt like we’ve experienced kind of a crazy couple of years after the first album, and we wanted to create a thematic album, something you could say connects. That was sort of the theme for us, that our lives got rearranged in pretty significant ways in almost every single area and a lot of that, I think, if you’re a fan of Mt. Joy, is super positive – touring and doing all these fun things. But most of it outside of those things is super negative, unfortunately.

That’s sort of life, the yin and the yang. We’re so stoked to be having all of this success, and it’s not all negative. Of course, some of the outside stuff has been positive. But in a big way, I think all of us can say that our lives were kind of rearranged by this, so that kept popping up and we just sort of ran with it.

JS: I think back to an old, old interview with you … you guys were in law school and Sam was a lawyer and you were saying that you were about to sign up for classes. And then it was like, well, do I do another semester or do I take this band on the road? And that is just such a huge decision … it’s gotta be tough, right?

MQ: That decision was tough for the moment that it was a decision, but at this point, it doesn’t feel like that tough of a decision. I don’t think me being anyone’s lawyer is advisable at this point. But, kind of like I said, this whole thing has been a crazy leap. It’s worked out but it’s had its externalities, if you will.

JS: Let’s talk about struggles some more. I think when a band puts out its first album, you’ve lived up to this point, you’ve had your whole life to write these songs, you find some success, you go on the road and then it’s like OK, I have to write another album. Is it difficult to come up with material to write about? I feel like it’s gotta be a little more of a struggle the second time around.

MQ: I think the idea that we kind of were rearranged – we were all in different relationships and it’s just hard to stay in contact with old friends, you go home and people are married and it’s like how did that happen? When did that happen? But I do think that there is a lot of source material for sure, and inspiration from that for this album. 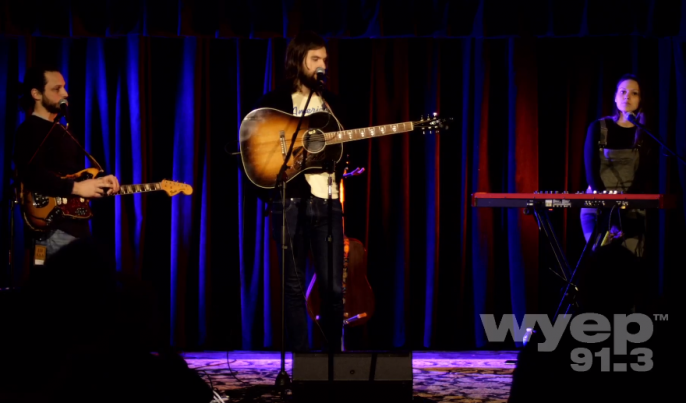