It’s hard to be a band for 25 years. It’s even harder to be a good band for that long. But here we are, staring down a quarter century and Punchline continue to shine, pushing themselves to find the full realization of their sound. “Find Yourself” (listen above!!) is a dazzling song full of that Punchline honesty we’ve loved for so long. In honor of Punchline’s longevity, here are 25 songs that shaped the band, in no particular order.

The Get Up Kids – Holiday
Early on we were mesmerized by the pop-punk bands like MXPX & Blink 182, but once we heard The Get Up Kids, we began to lean Emo and prefer that sound more. We got to tour with them in 2005 and later did a (ska?) cover of this song.

Boyz II Men – Motownphilly
They were 4 boys from Philly with a good attitude and we were 4 boys from Pittsburgh with the same! Too bad we never got to tour with them… yet. We covered “End of The Road” at some point.

That Dog – Never Say Never
We heard them on some compilations and taped this video on VHS when it played on MTV’s 120 Minutes. One night some of us stayed up all night watching that video on repeat. What a perfect song.

The Suicide Machines – New Girl
They had the unique combination of having the melodic sense AND hard hitting angsty live energy. I think we found them on MTV’s 120 Minutes show and subsequently went to all of their shows.

Jimmy Eat World – Bleed American
We had never heard guitars rock like this. The recording was incredible and we loved every song. Clarity, this, and Futures— one of the most impactful trilogies out there for us.

MXPX – Today Is In My Way
This 3 piece really got to us early on. They had catchy songs and their singer was so painfully cool. We later got to tour with them in the UK in 2009.

Jellyfish – New Mistake
Quite possibly one of the most underrated bands ever. As a band who loves its harmonies, this song has remained a van ride staple.

Gin Blossoms – Found Out About You
Gin Blossoms were such a huge band for us. We liked them as kids, from way before we were even into punk rock. Then years later, we became friends with them. Robin even took us out on his boat when we were a young touring band passing through Arizona. We played together on New Years Eve in Station Square in 2009, and then a decade later, they took us on their New Miserable Experience anniversary tour. We released a cover of “Found Out About You”, and we’d play it at their VIP event with Robin singing it. We love this band.

Death Cab For Cutie – We Looked Like Giants
Lyrically this band really opened our eyes to aiming for clever, beautiful imagery. The way they used guitars was helping us to get away from using so many dang power chords.

Glassjaw – Pretty Lush
The intensity of Daryl Palumbo’s vocal delivery was unmatched in our world of music. He could sing like an angel and scream like a demon. He was our generation’s Mike Patton, and the debut Glassjaw album was the ultimate release of frustration.

Ben Folds – Annie Waits
We played this album into the ground. What a catalog of great songs he has. So inspirational to us. You really start to hear Ben influence on our Just Say Yes album.

The Juliana Theory – If I Told You This Was Killing Me, Would You Stop?
The Juliana Theory showed us that it could be done. They were from less than 20 miles from where we grew up, and they were touring nationally and had a huge following. The Emotion Is Dead album set the bar for local music for sure.

Unsung Zeros – The Best Time
The first band we ever toured with on a national scale and the first band we ever fell in love with in a band bromance kind of way. After many member changes they called it quits, leaving behind this last EP that wasn’t released until recently.

Archers Of Loaf – Web In Front
The first band Steve saw at Club Laga. Stars of the Mallrats soundtrack. They used weird tunings and their songs were creatively all over the place, following no particular structure. Inspiring!

Ween – Mister, Would You Please Help My Pony
Ween appealed to our collective absurd sense of humor. Meeting fellow Ween fans is always an instant bond.

Less Than Jake – Automatic
Chris was on the Less Than Jake street team and we had gone to see LTJ more than any other band at the time. To be later signed to their record label and taken under their wing was just the most special thing. We covered Automatic the last time we toured with LTJ.

Operation Ivy – Unity
We came up in the ska-punk boom of the late 90s. Had it not been for Op Ivy a decade earlier, that third-wave would’ve never happened. Their Energy album also showed us that it was possible for a group of teenagers to make music that would change the world.

They Might Be Giants – Ana Ng
TMBG showed us we could write songs about whatever we wanted and your band’s sound could change from song to song and album to album. They had multiple singers and songwriters, and in a time of bands taking themselves too seriously, they did not.

Nerf Herder – Nosering Girl
We are no strangers to writing love songs, and you always need a muse to do that. Nerf Herder painted a perfect lyrical picture of the kind of girl any of us would write a song about.

Duncan Sheik – Genius
You can always count on us to include some adult contemporary on our playlists. There’s a musical note combination in this song, more technically called an interval, that we took influence from for our song Open Up.

A Week In July – nearfatalexplosion
The friends we grew up with had a band in the late 90s / early 2000s. This was the title track on their full-length album. It’s energetic, catchy, and unique.

Green Day – One Of My Lies
“One Of My LIes” was the first song we ever learned as a band at our first practice. Would we have existed without Green Day? Probably not.

Weezer – My Name Is Jonas
This list should probably be the 25 BANDS that shaped Punchline because here’s a great example of how it’s hard to pick just one song. Weezer were undoubtedly a huge influence on us, and this is the song that started it all.

Counting Crows – Round Here
On our first tours, we would sing every single word to the entire August and Everything After album to stay awake on long night drives. We also acted out the lyrics as we sang them. We would absolutely go crazy when we sang the “she says she’s tired of life, she must be tired of something” line. We would later cover this song.

Punchline will be celebrating their 25th anniversary with us all on July 8th at the Thunderbird Cafe & Music Hall.

Catch up on your Punchline history on their podcast “A Band Called Punchline.” 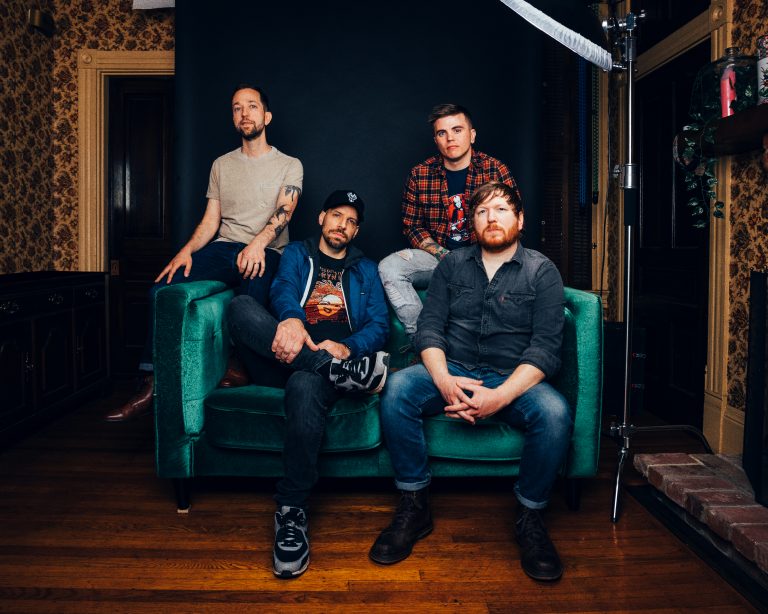 The Living Street: WYEP's Pittsburgh Artist of the Year

"Bipartisanta" Is The New Santa In Town

“Bipartisanta” – the new holiday single from Pittsburgh honky tonkers The Bindley Hardware Co. has a little something for everyone.