With The Suitcase Junket Doors @ 7pm // Show @ 8pm The Heavy Heavy create the kind of unfettered rock-and-roll that warps time and place, immediately pulling the audience into a euphoric fugue state with its own sun-soaked atmosphere. Led by lifelong musicians Will Turner and Georgie Fuller, the Brighton, UK-based band began with a shared ambition of “making records that sound […] 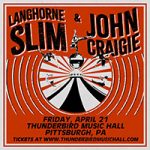 Doors @ 7pm Show @ 8pm Age Restriction: 21+ Nashville and Portland troubadours Langhorne Slim and John Craigie are coming together for 10 intimate solo shows. Joining forces for the first time on tour since sharing the stage at the Newport Folk Festival, the duo will be stripping down to the essence of what they […] Doors @ 7:00 PM // Show @ 8:00 PM AGE RESTRICTION: 18+ or Accompanied by Legal Guardian Raised and rooted in New York City by classically trained musician parents and their wide-ranging, eclectic record collection, BAILEN has emerged as a favorite in indie circles by cultivating a passionate following via word of mouth, robust playlisting […]